What is the least fun part of travelling? Taking transportation such as metro. Despite the low transportation cost, hot temperature, old facilities, poor hygiene, boring and many more reasons that makes me believe it is a waste of time. But not in… Stockholm.

Stockholm has a unique subway system. Unlike other modern city like London and New York, the approximately 100 stations each has unique art on its platform and waiting hall. Since 1957 artists have played a key role in designing new stations and revamped the old metro stations to be spruced up with beautiful statues, murals, and installations.

When we two spent a day in Stockholm’s metro, it was basically like visiting the world’s largest art exhibition. Today we are going to introduce the Top 6 metro stations that would give you the best feed for instagram.

Unlike the spider-web like metro system in most metropolitans, Stockholm metro system is relatively simple. There are only 3 major lines covering the whole city. 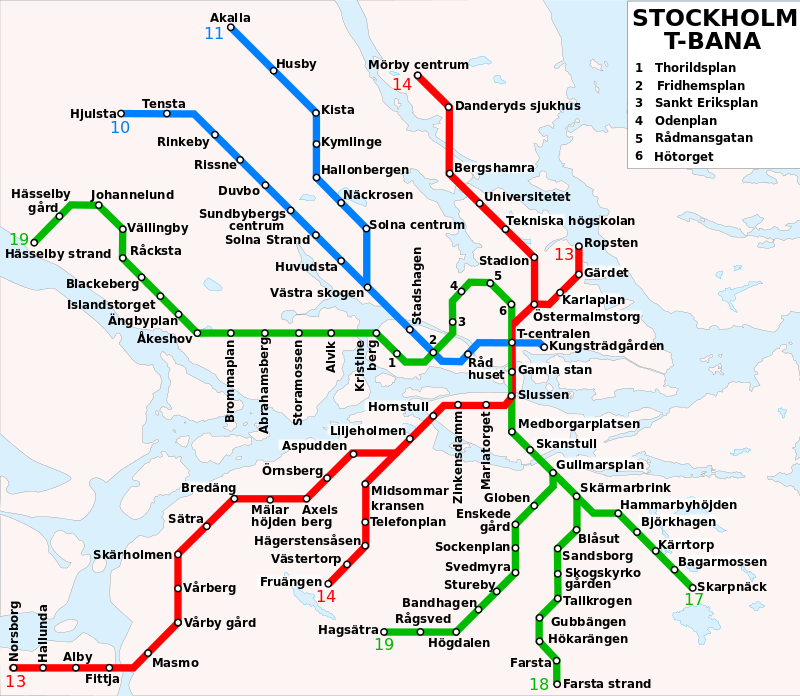 To get to Tensta, you’ll need to take the Blue Line that takes about 20-minutes from T-Centralen.

Not until you write a blog, you find the details of the wall art. It is a beauty of equality and acceptance.

Tensta is a community with a majority of immigrants to Sweden. The artists, Arne Sedell and her brother Lars, Helga Henschen, spent over a year decorating the platform with display of animal sculptures and leaves.

The words written around the station are a celebration of all the people from different cultures living in Tensta.

If you’re joining the metro at T-Centralen, it’ll take you around 16-18 minutes to reach Solna Centrum via the Blue Line.

The opening of Solna Centrum in 1975, originally was designed to be solely green and red representing the timeless beauty of forest and sunsetting behind the treetops.

Time passed and the walls artists Karl-Olov Björk and Anders Åberg felt something were lacking so they continued adding various details and scenes to the forest.

If you’re heading to Solna Centrum, it’s an easy station to visit.

Rådhuset has spectacular arches carved straight from bedrocks and left raw to form the rocky ceiling of the station. The orange colour resembles the ground of the earth

The designer wish it to be like an underground grotto. Try to discover the intricate details in the station.

The station is the main hub of Stockholm’s subway opened in 1957. It was also the first station to feature artwork. The blue platform is now a symbol of the metro.

The artist Per Olof Ultvedt chose blue to paint aesthetically and functionally which brings a relaxing and calming vibe. Apparently, Per devised a perfect balance of an interchanging metro hub and a pause for passengers with the sooth.

From T-Centralen, the journey will take you around 10-minutes.

If you have limited choice, the Stadion is a good choice for you regarding its easy-to-reach and instagram-able. The art was delicately created by Åke Pallarp and Enno Hallek created with a signature rainbow positioned at the tunnel between the opposite platforms.

The station was built in 1973, one of Stockholm’s first cave stations. Controversies over the construction of metro stations was overcome by the gorgeous art in the stations.

The bright rainbow is a reminder that the sky is not far about to sooth the fears of people who associates cave stations with the netherworld and other nasty places.

From T-Centralen, the journey will take you around 10-minutes to reach Tekniska Högskolan, and it takes only 1 station after the Stadion.

Created by artist, Lennart Mörk, the station is a fascinating exhibition of scientific advances. The station was built in 1973 to provide the Kungliga Tekniska Högskolan (KTH Royal Institute of Technology) student an easier access to classes.

“You’ll also find representations of Copernican heliocentrism, Polhem’s mechanical alphabet, Newton’s three laws of motion and da Vinci’s attempts at creating a flying machine, explains art guide, Marie Andersson.”
Alright, I regret that I didn’t read this passage before I went to the station otherwise I would definitely find them all out.

Visitor tickets can be purchased at most stations, SL Centers, newsagents, via SMS or the SL app.

More about the Nordic 18 Days: